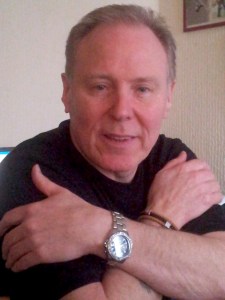 I was born in Liverpool, England and grew up in the 1960’s when The Beatles were “happening” and very popular as well as all the other music groups from Liverpool and my main influences were R&B soul and Motown. It was a truly magical time particularly for me as I was passionate about music and singing.

My psychic abilities commenced when I was about five years old and as I was the youngest I was always sent to bed early, but I never complained as I was looking forward to seeing the Lady, who came to see and speak with me and hoping that she would be back again. She would gradually materialize and I was in awe of her magnificence and beauty. She radiated so much unconditional love so when she was close to me I was in a state of complete bliss. A pure and bright white shining light emanated from her mouth and eyes so I couldn’t help but stare into her mesmerizing and enticing eyes.

By the time I was eleven, I began to realise that I could predict events that would occur shortly afterwards and I instinctively knew when they were about to happen, particularly sporting events. There was always a newspaper available at home and so I would flick to the back page to view the horse racing section and fill in the race meetings for every race that would take place on that day. On the next day, I would look up and check the results for all the horse races that I had chosen and I noticed that they would always win. I was so confident that I was right in my choices so I showed my mother as I felt very pleased and proud of myself. She took an interest in what I was doing and questioned how I had been able to do it so I simply told her that I just knew they would win. She therefore asked me to do it again the next day and I successfully chose all the winners yet again so she decided apprehensively to test my ability on the following day and betted two pounds on two of my selections and they won as I had expected. She was naturally delighted and amazed with my wonderful ability. Soon word got around so the neighbours also discovered my talent for selecting the winning horses. I informed them all about the five winning horses on that day and they were all so immensely delighted as they each won a small fortune. However, a couple of days later when my neighbours came back again my mother decided that I was not going to choose horse winners any further and asked them all to leave.

As I mentioned previously with my great love for music and singing I decided to pursue this when I was twenty so I joined a R&B soul band in Manchester.  I was one of the vocal leads and we would sing R&B soul and Motown and we travelled and performed around the UK and Europe. I continued to do this for several years and eventually performed as a duo and solo act when the band split up due to unfortunate circumstances. I am still involved with music fortunately and I still write and perform various projects including the production of my own meditation MP3s which are available on my website.

Whilst I was heavily involved in the music scene I was still affected by my strong spiritual and psychic abilities and I had to finally accept the fact that I had to pursue this further. I was having strange experiences and vivid dreams on a regular basis. This is an example of one of my experiences that I had whilst I was living in a flat. I had returned home late so as I was exhausted I went to bed and whilst I was falling asleep I heard very strange musical sound which sounded like a male choir singing out loud. I therefore opened my eyes to check where this sound was coming from and to my utter amazement I saw a strange man very clearly who was standing at the foot of my bed and he spoke to me and informed me that he used to live in this house and that the flat was part of his bedroom. I was terrified and shocked and he disappeared fortunately but I still felt uneasy and restless afterwards. The next day I remembered that I’d heard a male choir singing so I decided to investigate this further. I looked up the address details for the nearest Spiritual Church and I found the Dudley Spiritual Church in Liverpool suburbs near Penny Lane.

I met a woman called Marie Abrahams who was a medium at this church and she invited me to the Wednesday night circle. On my first visit to the Spiritualist Church I arrived at 7.30pm. I noticed the Church was situated above the Dudley Snooker Club. I had to climb a set of stairs at the back to access the double room in which the Church was situated. The congregation were seated in a circle and Marie welcomed everyone to the service after asking a scary looking gentleman who was sitting closest to the door to shut and lock it. We said a few prayers and then the lights were switched off except for a small red light which made the place feel uncanny and eerie so I felt nervous and uncomfortable. As the circle began various people got up and walked to another seated member to give them a spiritual message. About twenty minutes later I was greeted by the man who shut the door I felt scared and anxious as he walked towards me as he was 6ft tall and of a stocky build.

He spoke in a very deep voice and informed me that Spirit were waiting for me and that they wanted me to work for them. He reminded me that I had already had several visits from Spirit and that it was time I paid attention and opened my mind. He then also mentioned the man in my flat and that I had heard singing and I was surprised and shocked as to how he knew about this. He then added that the music was coming from the Spiritual Spheres in-order to wake me up and get my full attention! He then sat back down in his seat and Marie closed the circle around an hour later and the lights were switched back on. We then proceeded to have tea and biscuits as if everything was normal and this felt surreal for me considering what I had just experienced! My mind was racing and I felt perturbed so I asked Marie for advice about the message I had just received and how I could help the man in my flat. She simply advised me to pray for him and to request my Guides and Spirit helpers to help him to move on.

When I finally returned home that night I felt scared and confused about how I would deal with the strange man if he reappeared again. I then remembered the spirit Lady from my childhood and wondered where she was now as I felt she would certainly know how to deal with him and I was convinced that everything would then be back to normal. I dosed off again and was in a deep sleep and I dreamt of this man and I heard the male choir again and as a result I woke up startled and sat bolt upright and saw the man clearly standing again at the foot of my bed. The man informed me that I was supposed to help him and that was why he was drawn to me. I told him that I was not able to help him but I remembered what I was told at the Spiritual Church earlier so I began to pray hoping that the spirit Lady would turn up. I then saw a light shining in the corner of the room and I felt relieved and expected to see the spirit Lady but to my utter surprise and disbelief I noticed that this light grew larger and brighter and then I saw a huge figure of a Native American Indian man who was clothed in his native costume and with a full feathered headdress. The man noticed him also. The American Indian then spoke to me telephatically and informed me that he was here to help me and that he had walked the earth with me in previous incarnations and that he would help me again in this one also. He informed me that the man did not belong on the earth plane and that he would take him with him and that I should go back to sleep as I was safe and that I would not be disturbed by him any further. I felt reassured and less stressed as a result but I was restless and preoccupied with trying to make sense of what I had just witnessed so I didn’t sleep much that night.

I became a regular member of the Dudley Spiritual Church and I am pleased and grateful to say that with the assistance from Marie and the others, I developed my mediumship qualities further. The Church was closed and Marie Abrahams has now passed away sadly. She was a truly amazing beautiful and gifted medium who was always ready and willing to help people. I eventually became a member of various closed circles. ( A closed circle is a group of regular sitters who are developing their mediumistic skills). I look back to that first visit and smile when I think how scared I was.

My mother passed away thirty five years ago and I was fortunate to see her again in 2000. I was suffering from influenza and resting in bed as I was very ill. I noticed that I had drifted away from my physical body so I thought I was about to pass on and as I was walking towards the door I saw one of my guides who informed me in a very soothing and calming voice that I should not be alarmed and that I was fine. I immediately felt my self being pulled back to my body on the bed and I saw my mother seated next to me. I felt comforted immediately as she stroked my brow gently and told me not to worry and that everything would be alright.

I now work full time as a Psychic-medium and healer along with the help, guidance and support of my Native American Indian Guide “Stepping Eagle” and my other guides and spirit helpers. I have the following special skills including Clairvoyance (the supposed faculty of perceiving things or events in the future or beyond normal sensory contact), Clairsentience (which means clear sensing, is the ability to feel the present, past or future physical and emotional states of others, without the use of the normal five senses)and Clairaudience (the supposed faculty of perceiving, as if by hearing, what is inaudible) which I use to help others and communicate with the Spirit world. I relay messages that that my guides provide me from the Spirit world. I also provide EFT sessions. I work in Liverpool in the UK and provide readings to people all over the UK and Internationally both in person/phone and using Skype. I also run workshops in meditation and development groups for people who want to develop their own psychic and mediumship skills.